Cibes Hissit Oy acquires 100% of the shares of Amslift Oy. Both companies will continue to operate under their current brands and with their current products. The employment of the personnel of both companies is not affected by the acquisition.

“The expertise and the offerings of the two companies complement each other very well. We are both market leaders in our fields, and together, we can take responsibility for larger-scale projects, and benefit from having more installers to direct to the busier projects. The two companies have worked together before, so we are no strangers to each other,” says Juha Kiviranta, the CEO of Amslift. 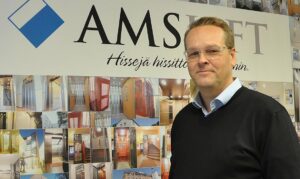 Cibes Hissit is part of the Swedish Cibes Lift Group, a leading manufacturer of low-speed lifts in Europe. Cibes was founded in 1947 and currently operates in 14 countries. Cibes Lift Group has around 500 employees and a turnover of about 100 million euros.

“Amslift is our first step into the market of high-speed lifts, and this acquisition strengthens our position in Finland. Amslift is the biggest supplier of customized lifts installed in existing buildings in Finland. They have highly skilled lift installers and a committed management. They also have unique expertise in installing lifts in prestigious existing buildings,” says Mats Engblom, CEO and President of Cibes Lift Group.

“I believe that the established networks of Cibes Lift Group will open the door for us to start exporting our lifts to Europe in particular. The old European cities have a vast number of high-rise buildings without elevators. Our customized lifts respect the old architecture and are excellent solutions for these premises,” says Juha Kiviranta.

According to the Housing Finance and Development Centre of Finland (ARA), every other apartment building in Finland has no lift. These apartment buildings have 600,000 inhabitants, and 100,000 of them are over 65 years old. Having a lift supports independent living at home, and it has been estimated that an elderly person can continue to live at home for 6 to 8 years longer when the apartment building has a lift.

“In Finland, there are around 40,000 staircases that are at least three storeys high but have no lifts. Having a lift benefits not just the elderly, but also people with physical challenges and families with children and increases their comfort of living. A lift also increases the value of the apartment. Building a lift is more affordable for example than renovating pipes,” says Juha Kiviranta.